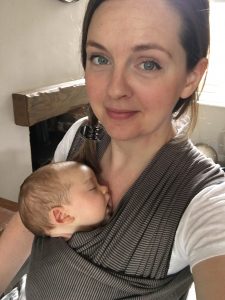 I have occupied many chairs over the past few years: the therapist, helping others to make sense of their own emotional pain, the pregnant woman in the triage room waiting to be informed that her baby had died, the bereaved mother in the funeral director’s office deciding between burial or cremation, the parent listening to her baby’s post-mortem results in the consultant’s office, the woman with postnatal depression having therapy with another psychologist. So often, I come away from these interactions wishing that I had said something else. Something more. I wonder if they really understood what I was trying to convey. Or sometimes there were things that were just too difficult to say. The words too fragile or precious to share, through fear that they would be thrown back only to shatter into a million little pieces.

Some of you may know of, or even have experienced ‘chair work’ in therapy; the use of an empty chair to represent someone else, or another aspect of yourself, with whom you need to talk. Or you may have written letters, that are never to be sent to the recipient, yet facilitate an outlet. This could be to express feelings of anger or distress. Maybe it is to question or hypothesise what the other person or part of you might say. Sometimes you might move from one empty seat to another, or write letters in response. It sounds odd, and even as a therapist I wasn’t sure how it would work in the therapy room. Yet without doubt, these are two of the most powerful techniques I have ever used.

The thing with speaking to an empty chair, or writing a letter that won’t be sent, is that you can do so without fear; you will not be rejected or humiliated. You will not be shut down. It is a way in which to express that which is often too terrifying to speak, yet is so important to hear. And this is what I want to curate in this space: a place to say the things that can feel impossible to say and yet need to be verbalised. To speak from my place as a mother who is bereaved and parenting after loss as well as my place as a psychologist. And to provide a space for other people to speak their own truths from one chair to another.